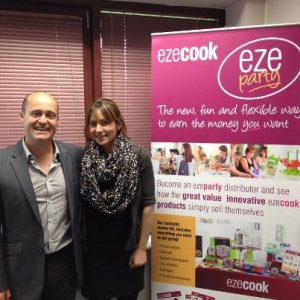 You may recognise Kleeneze’s latest recruit. Jenna Whittingham, the 25-year-old beauty salon owner, recently appeared on BBC One’s The Apprentice. Now, she has joined up with Kleeneze to help promote the new EzeSpa range.

We caught up with Jenna to find out about her journey from boardroom to beauty products:

How did you come to apply for The Apprentice?

I’ve always been thinking of ideas for businesses and making money, and at the time I was running my own beauty salon in Penwortham near Preston. My customers obviously recognised my entrepreneurial streak as they were always telling me that I should apply for The Apprentice, so one Saturday evening I decided to go for it!

How would you describe the experience of appearing on the show?

I have to admit that I hadn’t watched many series of The Apprentice before appearing on it, so I wasn’t entirely sure what to expect.

The first couple of weeks were quite daunting but then I started to get into it and find my feet. Ultimately, it was a very tough but rewarding experience.

What were the main things you learnt from the process?

I learnt that I can turn my hands to a lot of things – I won a task as project manager for example and was also a top seller on one of the other tasks.

As my profile has increased since appearing on the show, it has also taught me to keep an open mind and seriously consider any opportunities that come along, as you never know where they might lead.

How did your relationship with Kleeneze come about?

I was approached by Doug Roper, who is one of Kleeneze’s top performing distributors, via Twitter. He explained the opportunities that were available with the business and that he thought it could suit my skill sets. it seemed like a perfect fit with the beauty work I was already doing.

What work will you be doing with Kleeneze?

I’ve joined Kleeneze as a distributor under the EzeSpa option, so I’ll be promoting and selling the range of beauty products through my two beauty salons. I’ll also be doing some recruitment work to encourage people to sign up as distributors, both in my salons and by taking part in demonstrations at shopping centres and other venues.

Going forward, I’ll also be looking to form my own team of distributors.

What appealed to you about the Kleeneze offering?

As I now have two beauty salons, I did wonder at first if it would be too much to take on. However, when I heard the details I realised that it would be easy to fit the work with Kleeneze around my other ventures.

In a recession, where people are in need of extra money, a business model like Kleeneze’s is particularly appropriate. One of my ambitions is to be a millionaire by the time I’m thirty and I definitely think Kleeneze can help me achieve this.

Thinking about joining EzeSpa, EzeCook, (both under EzeSpa) or Kleeneze? Leave your details HERE for further information.

Thank you for leaving your comment here Cancel reply

Error: Twitter did not respond. Please wait a few minutes and refresh this page.